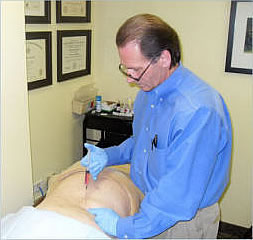 Remarkable Recoveries From the Journal of Prolotherapy

Abstract: This article discusses the case of 57 year-old Bill B, a dentist, who suffered from chronic pain from ligamentous laxity and degenerative disc disease in the cervical, lumbar and thoracic spine. His headaches and back pain were treated successfully with Prolotherapy even after many years of other treatments with failed results.

Dr. William B. is a 57-year-old dentist who had a 15 or 20 year history of low back, thoracic, neck pain and headaches. He had surgery on his spine to relieve pressure on the spinal cord from bone spurs but he was left with a lot of pain below that area, to the sacrum and the hip. He also had chronic neck and thoracic pain. Extensive treatment over the years included attending a pain clinic, multiple medications including OxyContin, Percodan, and Neurontin, radiofrequency ablation of the facets, nerve root blocks, and facet injections that were all of little benefit. He had an SI joint injection at the Mayo Clinic that helped him temporarily. He had a course of acupuncture that helped some. He went through an intensive back and neck strengthening program using computerized strengthening that helped the strength but did not change his pain level. He tried massage and yoga that actually increased his pain. An inversion traction table increased his pain. He had multiple neurology evaluations and EMG’s that were negative. He did have hyperreflexia in the lower extremities since his thoracic surgery.

At the time of his first visit what was most bothersome was low back and hip pain, right greater than left near the SI joint. This increased with prolonged standing and sitting. Secondly, his work as a dentist required him to be twisted in a bent over position and turning his head to the right causing left-sided neck pain and right-sided headaches, which were constant for one and a half to two months. He had chronic thoracic pain on the left side below the area of the surgery, which was constant. This was particularly noted with twisting and golf. A night splint for TMJ helped his headaches somewhat. He had difficulty sleeping, had pain in the low back with standing, pain in the neck and thoracic area that affected his work especially bending over patients, and he couldn’t exercise in the gym, or play golf without significant pain.

He really had no change in pain for several years before his first Prolotherapy visit except for some increase in his neck pain. He had shoulder surgery in the past and multiple knee surgeries including ACL reconstruction and medial and lateral menisectomies. He would get right intermittent knee pain. On examination he had tenderness typical of ligament instability and attachment pain over the cervical facet columns, right greater than left and at the base of the skull, and right side of the head. He had some anterior shoulder tenderness and some limited range of motion of the shoulder. There were degenerative changes in the knee examination and some evidence of loss of joint space. He had tenderness at the iliolumbar and SI ligaments and facet columns L1 to the sacrum that is typical for ligamentous cause of low back pain. There was evidence of spinous processes removed from previous surgery.

He had Prolotherapy to the head attachments, the neck and the low back. After the first visit, one month later, he had marked improvement that he stated was “vast improvement or 80% improvement overall.” He had very little pain of the vertex of his head and very little neck pain. He started to have some tightness just prior to follow up visit and the low back was also much better. He only had some mild coccyx pain near the tailbone and occasional spasm.

After the second treatment he noticed further improvement. He had almost no headaches since the second Prolotherapy treatment. He was quite pleased with his progress. He reported having some flare in the left lower thoracic and lumbosacral area if he over exercised. The patient was instructed in strengthening exercises. He had a third treatment to the neck and low back after which he had no return of his headaches, and had some mild right SI pain with elliptical exerciser and high resistance training, but he was unable to do much of any exercise before having Prolotherapy. He noted some more left low thoracic area and right shoulder pain. He was treated to the thoracic and right shoulder and noticed very little pain at follow up. He was left with some tailbone residual pain, but was exercising 20-minutes once or twice a day and the shoulder was much improved. He was treated additionally with the shoulder and the thoracolumbar area. He continued to have very little pain in the neck, the low back and mainly pain the mid thoracolumbar junction below his surgery. He had two more treatments on his neck and shoulder. He was able to golf, play racquetball, do his work as a dentist, and exercise on elliptical, Stairmaster and lift weights without chronic pain.

He was quite pleased with his progress and expressed frustration that he had not found Dr. Kramer and Prolotherapy 15 years earlier. He continues to practice dentistry and exercises regularly managing his mild discomfort well, which was previously incapacitating and was not helped with any multiple medical interventions other than Prolotherapy and exercise.

Letter to Dr. Kramer from Dr. William (Bill) B:

I would like to tell you about my story. I had back surgery about 15 years ago, along with two shoulder surgeries in the past 10 years. I have been through many programs, steroid injections done in the hospital, physical therapy programs involving strenuous exercise. Despite this therapy I still had constant pain in my back and shoulder. I tried every exercise to strengthen the area, but the result was still constant pain. A Russian friend of mine recommended Prolotherapy which I replied, “I have never heard of it.” He was an athlete in Russia and said it was common treatment for athletic injuries.

That’s when I did my research and found Dr. Kramer. It took several months and repeated treatments, but I was able to get healing and strength in the area that was causing pain. Now I am happy to say that I can go to the gym several times a week without the painful after affects I used to suffer. If you have tried many therapies and had no luck, don’t give up, I didn’t!